You are here: Home / Android / Jetpack Joyride Cheats and Walkthrough

Jetpack Joyride tips and answers to help you get a high score in this thrilling running game, developed by Halfbrick Studios. This game is available for Android, iPod Touch, iPhone and iPad. Keep reading for tips, tricks and cheats for getting the most coins and going the farthest distance in Jetpack Joyride.

Jetpack Joyride is an endless running game developed by Halfbrick Studios. It requires not only your full concentration but also fast reflexes!

The premise is that you’re Barry and you’ve just stolen a jetpack from a high-tech and top secret laboratory. You need to escape the lab without dying! Barry can jump, fly and run and as the game progresses, he will move faster and faster.

The aim of the game is to go the farthest distance and gather the most coins. There are no levels but there are missions encouraging you to accomplish certain goals. While running, jumping and flying your jetpack, you’ll be expected to jump over or under lasers and zappers and even occasionally, dodge missiles!

And don’t worry about those pesky scientists, Barry can just bowl over them! In fact, the game encourages you to in certain missions!

While you’re playing this game, you’ll sometimes spot small tokens different than gold coins. These are spin tokens. You can collect an unlimited amount per game. Once your current run is over, you’ll be presented with a slots-like machine called The Final Spin. In The Final Spin, you can win extra coins, extra lives, blasters and heart starts.

There are also rainbow box boosters. If you can hit the box with Barry, you’ll unveil a booster. This booster works for you in two ways: one–it’ll help you with getting more points and two, if you hit a laser or missile, you won’t end your game! You’ll just lose the booster.

Inside of the rainbow boxes are five different boosters that serve as transport vehicles: Lil Stomper, Gravity Suit, Profit Bird, Crazy Freaky Teleporter and Bad as Hog. Each one has its own benefits and which booster you get is completely random.

Lil Stomper is a robot suit you can wear. It responds very well to your taps and is great for gathering coins. If you tap once, it’ll jump and if you tap and hold your finger, and Lil Stomper will fly. It doesn’t go very high and because of its bulky size, it’s not ideal for dodging lasers. 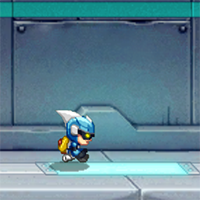 When you’re in a gravity suit, one simple tap will fling you from the floor to the ceiling. It’s fun for quickly dodging obstacles but perhaps the least useful of all the powerups. Although, some missions will require you to “change gravity” a minimum number of times!