You are here: Home / App Answers / What’s The Word Answers, Cheats and Review

The now universally popular game 4 Pics 1 Word: What’s the Word on iOS and Google Play for iPhone, iPad, iPod touch and Android, has recently updated with 124 new pictures and puzzles for you to spend and enjoy your time with! After updating last week for both iOS and Android, we were excited to play this game, but there was a little bit of a set back with Android version of the game! But thankfully RedSpell developers got to fixing the bugs on it, and we were able to enjoy it twice! And now we have all the 4 Pics 1 Word: What’s the Word answers right here! Enjoy!

Playing What’s The Word is a relatively simple process. ‘What’s The Word?’ shows you four images and gives you a series of letters. The four images each have something in common, and that one common string is the word. Each word isn’t that hard to find, and overall the game isn’t that hard to complete. After completing a level, the player is awarded a number of coins. These coins can then be redeemed for different tools; tools that can then be used to remove letters from the lineup, reveal one of the correct letters in the word, or even add an image in case the other four weren’t helpful enough. Like most games on mobile platforms, players can make in-game purchases. While these actual in-game purchases are limited to coins, if players find the game hard enough, they’re more than welcome to spend $20 on just over 7,000 coins. 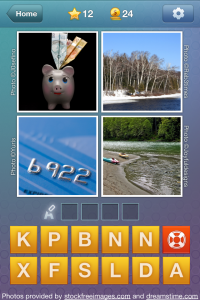 There seems to be a storm of wordplay games coming out on our mobile platforms. From varying versions of the classic board game Scrabble to twists on the old classroom game Hangman, people everywhere seem to enjoy pushing their brainpower to the brink by playing with the greatest of mankind’s tools: the word.

Nothing necessarily sets this game apart from a lot of the other word games. That isn’t to say, however, that it shouldn’t be played. Any game that tests knowledge and pushes the brain to think is worth playing, especially in a time when so many people are content with dumbed down games that do nothing for the brain. By no means is this Brain Age for the Nintendo DS, but ‘What’s The Word?’ is certainly better for intelligence than, say, Temple Run.