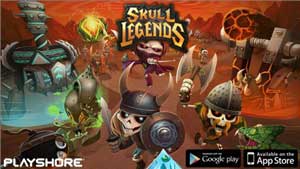 Skull Legends previously only for iOS devices, is now available to Android on Google Play. It has been featured in Tower Defense on the App Store and awarded in category Gameplay at the Unity China Awards for indie development.

As a player, you will enter the battleground firing and customizing your defense strategy with the help of specialized towers and blockades. Standing your ground against the attack of the skeleton warriors.

•         24 playing scenes that will take you from desolate cemeteries and soggy marshes to ancient ruins and charred lands where the head of the enemy legions resides.
•         15 different kinds of skeleton warriors. Fight against the ancient Celts, Roman legionnaires, Vikings and Samurais… each with unique powers.
•         6 types of defense towers with 3 levels of specialization and blockades like barricades and exploding barrels.
•         Dark Book with all the information on the various skeleton warriors, defense towers, bows, magic arrows, combat bracers and potions that you can use in the game.
•         High-definition 3D graphics that will no doubt immerse you in the battle.
•         Over 25 badges to unlock by demonstrating your skill at annihilating skeletons.
•         A treasure chest each time you make it through a scene and each time you level up. You will definitely have earned it!
•         3 levels of difficulty.

Skull Legends is available now worldwide for $0.99 in the Strategy Games category for all iOS and Android devices.

PlayShore is an independent developer of video games. Their goal is to produce high quality, highly entertaining fun games with an emphasis on innovation. Previous releases include Spelling Millionaire 2 a hit that reached number 1 in its categories Trivia/Word in 22 countries.