Mario Kart 8 Deluxe is here and it’s a must have! At a glance, it is clear that Nintendo has every intention to make this one of the most intriguing Mario racers to date. For starters, it features 42 characters and 48 courses. The 1080p mode is indeed a plus as is the auto steering feature for first-time players.

If you have played Mario Kart before, you certainly know that it is nothing like a typical racing game. For you make inroads and try to a win a Cup, you have to understand the game.We share some tips to help you stay ahead of the competition and to unlock important aspects of the game.

1. If You Can, Avoid Smart Steering

Yes, smart steering may be one of the most attractive features in Mario Kart 8 Deluxe but using it reduces your chances of winning. As a matter of fact, it will only serve you best if you’re a beginner who’s just learning the ropes of the game.

You see, once you activate smart steering, it will be virtually impossible to make maneuvers that can take closer to winning the game. Most importantly, you’ll have a hard time trying to access track secrets. And if you must really use this feature, do so in the 50cc races only.

2. Learn a Couple of Track Secrets

Mario Kart 8 Deluxe is more or less a wits game, so it helps if you get well acuminated with a few track tricks. Why is this important? Well, the game becomes more challenging as you scale the circuits. You’re more likely to have a competitive edge over other racers if you can pull a few tricks off the book, at the right time. Some of these include;

3. Collect as Many Coins Possible 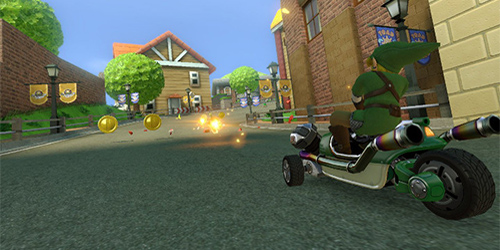 Be sure to bag all the coins you can, more so at the early stages of the game. It is worth noting that every coin you collect boosts you engine, which in turn helps increase the speed. Note you’ll only get a speed boost with the first ten coins. Any coin you bag after that will only give you a temporary boost.

The reason you need to collect coins at every chance that comes your way is that you will lose some if your opponent brings you to a complete stop. With many coins in your tally, you’ll have an easier time regaining the speed.

4. You’re Better Off with a Pro Controller

If you’re serious about making meaningful gains in Mario Kart 8 Deluxe, you have to abandon Joy-Cons and use a Pro Controller. Why? Well, because it has an ergonomic design that fits in your hand. In effect, this means that you’ll have better control over the joysticks and you won’t suffer from operation fatigue even when you play for hours.

By design, Mario Kart 8 Deluxe is an intense game and the more control you have, the better. At this stage, there’s every chance that you’re competing against A1 players so you’d better get your strategies right from the kick go.

5. Know the Ins and the Outs of the Drifting System

If you want to make an impact in Mario Kart 8 Deluxe, you have to understand the drifting system and use it to your advantage. One of the most helpful things you can do here is to sustain the drift for the longest time possible. Once you take your finger off the drift, you will give your engine a much-needed boost and increase speed.

And, because Mario Kart 8 Deluxe is a speed’s game, you can be sure that this will help your quest to top the leaderboard. Try to holding on to the drift long enough to trigger an orange flame beneath your racer. In other words, the more you hold onto the drift, the bigger the speed boost. Note, mastering the drift will prove even more helpful as you scale through the levels.

Bonus Tip – How to Unlock Gold Mario and the Karts

To unlock Gold Mario, the most coveted kart in Mario Kart 8 Deluxe you will have to bag every available cup in the Grand Prix. There’s a catch though, to achieve this, you must race at 200cc, which also happens to be the fastest speed and the most demanding task in the game.

To Unlock the Gold Standard Kart, you have to bag every Cup using a single star on both the Mirror Mode and Grand Prix at a speed of 150cc.

To unlock the Gold Tires, you have to outrace every Staff Ghost within the set Trail Time at a speed of 150cc.

To unlock the Gold Glider, you must have 10,000 coins in your tall